How to increase your cassava yields

HomeBusinessHow to increase your cassava yields 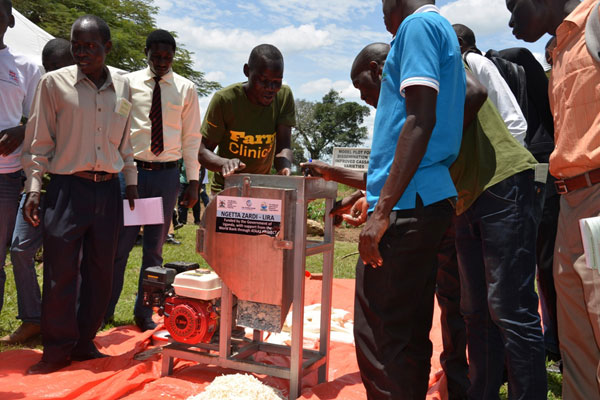 Cassava is fast becoming Uganda’s newest staple food.
Many farming families, estimated at around 60 per cent, are dependent on agriculture. In northern Uganda, where some plants such as maize have been ravaged by severe drought, cassava fields have weathered the times.
Sam Nek, a farmer in Lira, says harsh climate does not worry him any more since he started growing cassava in 2017.
“I used to grow maize, but since I turned to cassava farming, I do not worry about the drought,” Nek says.
There was a concerted effort to boost cassava growing in northern Uganda through a World Bank funding towards Agricultural Technology and Agribusiness Advisory Services (ATAAS) project.

Samson Obong, an agronomist at Ngetta Zonal Agricultural Research Development Institute (Ngetta ZARDI) in Lira District, who taught farmers about maximising cassava yields during the Farm Clinic last Saturday, said poor agricultural techniques still hold back production.
“When farmers fail to achieve more than 10 tonnes per acre, it keeps them in a cycle of extreme poverty,” Obong said.
The good news is that Ngetta ZARDI’s deputy Director General, Dr Imelda Kashaija, has confirmed that NARO has developed up to 23 cassava varieties that are early maturing, drought and salinity resistant as well as tolerant to diseases.

Improved varieties
In Uganda, there are several cassava varieties. Some farmers still prefer to grow indigenous plants but according to NARO, the best varieties are NASE19, NASE14 as well as NAROCASS 1 and 2.
Alfred Kumakech, a research officer at Ngetta ZARDI, says choosing a suitable variety is crucial.
Improved varieties share similar traits such as being tolerant to drought, resistant to mosaic and cassava brown streak diseases while giving high yields.
NASE varieties were introduced in 2011 but the latter is more popular for its high productivity. NAROCASS 1 has gained more popularity over the more disease resistant NAROCASS 2 because its higher yields are the bait.

What to plant
Obong says NARO multiplies seeds but works with private partners for wider reach.
He advises farmers to accept stems that are 2-4 cm thick, from the strongest plants which are not diseased and have already produced tubers.
“Don’t take the tender parts and the hardest part. Only the middle stem is ideal for cutting,” he explains.
These stems should be about 20cm-25cm, which is roughly the length of two ball pens.
He says that a stem should have about five to eight nodes to give it higher chances of germinating.
He advises that stems should not be planted immediately but rather be first rested for at least 10 days in a cool and dry place.

Planting
Obong says from plant to plant, the distance should be 1×1 metre, which is roughly one stride of an adult. This can be increased to 1.5 metres if inter-cropped.
Stems can be planted horizontally or vertically.
When planted horizontally, the hole to be dug should be between 10cm-15cm deep. If the farmer chooses to plant vertically, two thirds of the stem must be buried. One needs about six bags of stems per acre.
Each bag costs between Shs20,000 and Shs35,000 depending on the variety. He advises farmers to monitor the windward side and avoid planting rows against the wind to avoid their plants being blown away.

Weeding
Cassava does not grow well if not weeded because of competition for food and other nutrients. Obong advises that the garden should be weeded thrice.
He says the best practice is to plough land and allow weeds to grow, then weed and plant.
The second ploughing should be done about four weeks after sprouting. Then, before the plants form a canopy.
In the early stages, he says, inter-planting is fine to suppress the weeds.

Harvesting
Once cassava is ready, it should be harvested, because when left in the ground for long tubers lose quality due to hydrolysis of starch.
Obong says that generally cassava reaches maturity between nine and 24 months depending on the variety, climate and soil conditions.
The improved varieties can be harvested in six or seven months, but good yields are normally obtained after nine or 12 months.

Ratooning
For seed multipliers, Obong says after six months, cassava stems, are mature to be cut and planted elsewhere.
The stem is cut about 15cm from the ground without uprooting the cassava.
These stems are sold to other farmers and fresh vegetative parts usually grow within weeks. Weak stems that sprout should be removed to remain with three or four.
Usually after ratooning, Obong says, one can use herbicides.

Post-harvest handling
Cassava is used for many purposes after it has been harvested. It is a source of brew for Ngule and moga-moga, a local gin in northern Uganda, .
To be able to use it in other forms, the agronomist advises the use of the newly acquired cassava chippers and millers for the best products.
The available chippers, which cost about Shs4m, slice cassava in very small chips that can dry in about two hours on a sunny day.
The chips must be dried on polythene, tarpaulin or any other dark colouerd material for quick drying.

The diesel powered portable mill, which is also sold at the same amount, processes flour ready for sale on site.
Currently in Lira, a bag of unprocessed cassava costs about Shs30,000, because of surplus harvest, yet a processed 100kg bag would give the farmer an estimated Shs300,000.
“When farmers start making their flour, it will be a step forward in maximising profit from their farms,” he adds.
The machines are locally fabricated using NARO technology at Tonnet on Gayaza Road.

Rich history
In Uganda, cassava was introduced between 1862 and 1875 by Asian traders and spread to almost all parts of the country. Cassava grows well in more than 80 per cent of the arable land in Uganda. Its spread and cultivation was due to its adaptability to a variety of agro-ecological conditions and its tolerance to drought. Cassava is, therefore, regarded as a food security crop. However, its genetic diversity is threatened by diseases most notably cassava mosaic and cassava brown streak diseases that have resulted in reduced productivity.